My research and area of expertise is in American political history with a focus on the late nineteenth and early twentieth century. I study the intersections between the broader concepts of reform, progressivism, conservatism, and capitalism, and their effects on policy-making and political culture.

My doctoral dissertation is titled “For The Present Orderly Progress:” Congressional Conservatives in an Age of Reform, 1881 - 1913.

It examines conservative congressional entities and their active involvement in moderate reform efforts during the late Gilded Age and the early Progressive Era. The project expands the epistemological scope of progressivism and reform in American history, while reconciling concepts of ‘corporate liberalism’ or the history of capitalism within contemporary political history. 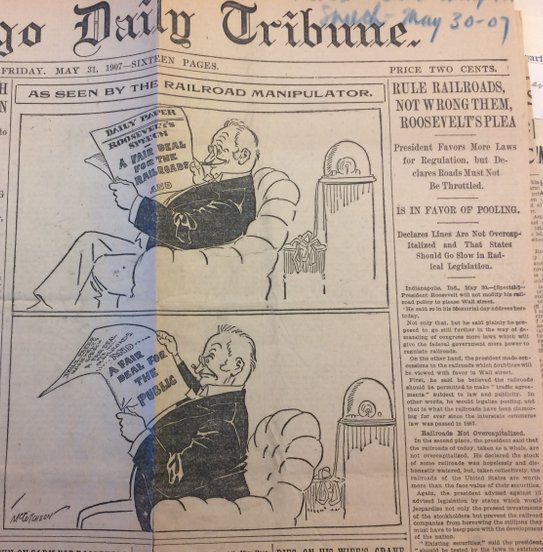 Description: The Progressive Era is commonly considered as a period of profound and unprecedented change in American society and politics. Yet, in many ways American “progressivism” during the late nineteenth and early twentieth centuries often reflected what Gabriel Kolko called the “triumph of conservatism.” Many of the reform-minded progressive icons, such as Theodore Roosevelt, were in fact part and parcel of society’s upper strata, and, despite their commitments to progress, they were often first and foremost concerned with preserving the power, wealth, and influence of their own class. Consequently, rather than effecting radical change, they often produced incremental reform, or “present orderly progress,” as the Rough Rider himself had once remarked. Roosevelt’s reform policies like railroad regulation, illustrated in this newspaper clipping, exemplify the dichotomous concept of “conservative reform.” The image depicts a railroad executive who is visibly pleased with the conservative elements of railroad regulation that protect the interests of his class, while he abhors the idea that reform proposals should also consider public benefit. By the early twentieth century, these business tycoons, as well as many of the ostensibly conservative policymakers who shepherded pro-corporate legislation through Congress, increasingly understood how to harness the growing reform spirit in order to safeguard their own interests. My dissertation project focuses on a handful of these conservative policymakers, including senators Nelson W. Aldrich and John C. Spooner, as well as Speaker of the House Joseph G. Cannon. The project seeks to demonstrate how these key conservative figures constituted distinct and conscious elements of American “progressivism,” both within and outside of their institutional contexts.